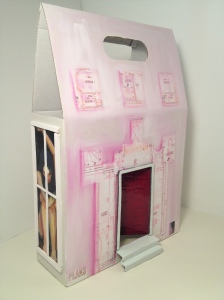 Sometimes an inspiration or motivation for a creative piece morphs and moves so much that I feel as though it has its own life-force.

As I had just taken a job with First Book, a non-profit social enterprise that gets new, high quality books to kids in need, I had been thinking about some of my favorite books as a child.  Harriet the Spy, by Louise Fitzhugh, came immediately to mind.  As a girl, I loved Harriet.  She was everything I wanted to be:  completely her very own person, an adventurer, confident in her abilities and yet totally tuned into the world around her as an observer and a critic of sorts.  She knows no fear and gets through one of the most devastating things that can happen to an adolescent — a social shunning by peers.

I particularly loved the illustrations of Louise Fitzhugh, and one that jumped immediately to mind was of Harriet in the dumbwaiter, spying on the Manhattan socialite.  I decided to look up the novel online and was drawn into a beautiful journey learning more about Louise Fitzhugh.  She herself was a social renegade and a bit of an outcast because of her rejection of her family, her community and her sexual orientation.  When Harriet the Spy was published 1964,  the book received as much condemnation for a character that defied social norms as it did praise for the creative genius that Fitzhugh demonstrated with her character and the story.  I thought of my mother and how she most likely introduced me to Harriet, just as she had introduced me to other work for children that encouraged individuality and non-conformity, like Free to Be You and Me or Where the Wild Things Are. Mom wanted her children to be able to create their own stories — to question what society dictated for them.

Outside the Box started from this thinking.  Sometimes who we are makes us very small to the world around us.  We might be seen as inconsequential because we are young, or we are women, or gay or have different religious beliefs.  But the weirdest thing is that when you feel inconsequential, it actually feels as though you are being squeezed into a very tight little box, kind of like Harriet in that dark dumbwaiter. The paintings on the sides of this form come from this place.

But as I meditatively worked painting and plastering this form, I found a much more redemptive place in my thinking.  Yes, we can feel constricted by social norms and they can be an evil force in life.  We can see ourselves as inconsequential.  But we can have the courage to challenge these norms as illusion.  In the eight-limbed practice of yoga, we are disciplined to focus inward, to quiet mind fluctuations, to find the end of duality because it sets up a falsehood that draws us deeper into the illusion.  What we work towards is freedom to understand that we are connected, we are part of the great universal consciousness.  While we remain unenlightened, we are actually just living in the shelter of a one-dimensional house.  Discovery involves some fearless climbing out of and scaling up the illusion of  a place that separates us from ourselves and the other.

A story Pema Chodron uses to illustrate how we gravitate to the security of this box — this illusion: 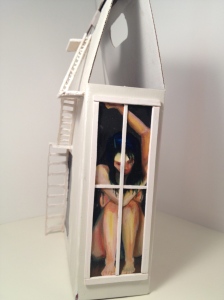 The truth, said an ancient Chinese master, is neither like this or like that.  It is like a dog yearning over a bowl of burning oil.  He can’t leave it, because it is too desirable and he can’t lick it, because it is too hot….We need encouragement and try [to leave our security].  It’s quite daring, and maybe we feel we aren’t up to it.  But that’s the point.  Right there in that inadequate, restless feeling is our wisdom mind. We can simply experiment.  There’s absolutely nothing to lose.    (From the Shambhala Sun website: http://www.shambhalasun.com)

So to think outside of your box, where must you climb?